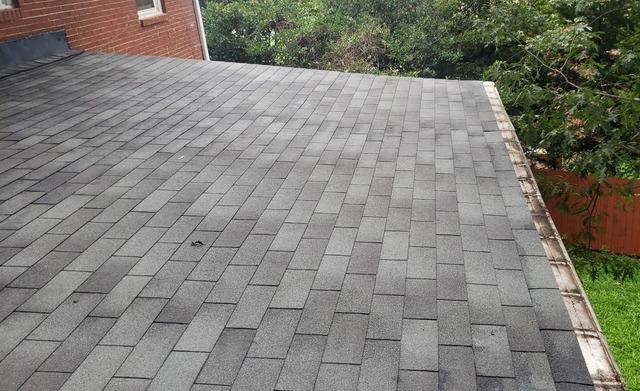 Ms. H moved into her home about 4 years ago. She has had a little bit of work done to the home here and there. The roof over her den has been a problem since she moved in. She had some skylights leak that caused damage, so she had them removed and sealed up. After a while she began to notice that the roof was leaking again. She had someone try to patch it and install a tarp over it. She called upon PGRS to come out and assess what would be necessary to take care of the problem. T.J. carefully inspected the roof and found that it had at least 3 layers of shingles on it. He informed Ms. H of a couple of options to replace that section of her roof. Before she could make a decision on how to proceed, a storm caused a tree limb to pierce a hole through her roof, into her den. Ms. H was then able to place an insurance claim on the damage to get it covered. Ms. H's section of roof over her den has been restored to new condition.