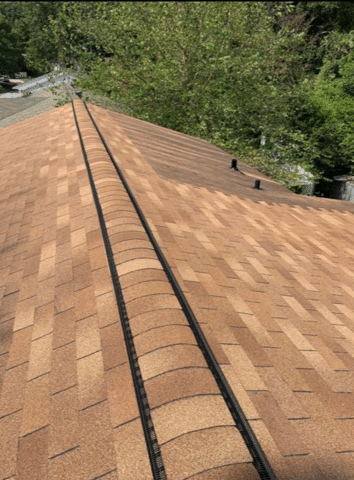 Mr. W had his roof replaced 5 years ago, and is now experiencing several leaks. The company that did the work is no longer in business, so Mr. W reached out to PGRS to evaluate his roof. T.J. performed a thorough inspection of the attic and found a lot of damaged wood near the peak of the roof. Once he got on the roof, he discovered that the ridge vent nail were never sealed, and caused all the current damage. T.J. proposed repair and replacement for Mr. W after showing him all the inspection photos. Mr. W said he wasn't in a position to take care of it at the time of the initial meeting, and would call when he was ready. A month later Mr. W was ready to go, and called T.J. to get signed up. Mr. W now has a roof that is 100% leak free once again.